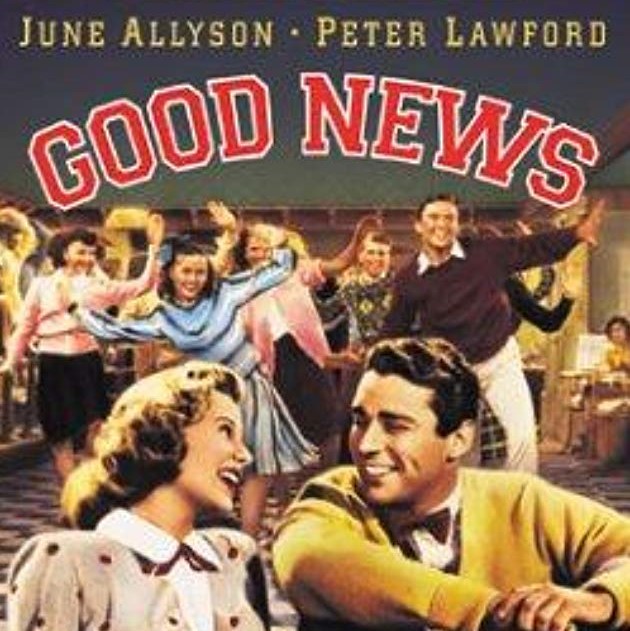 MGM musicals are a brand.  Every major studio during the classical era tried their hand at musicals, and you’ll find successful ones with a variety of stars, but MGM, in my opinion, owned the genre.  During the 1930s, musicals were how studios stretched the capabilities of sound technology, as well as how they entertained downtrodden masses.  After the war, it was clear the genre hadn’t lost its appeal, and many of the best-known movies in the genre were made after 1945.

Today’s movie, Good News, isn’t in the “best-known” category, but ten minutes into watching it I was definitely sad I hadn’t caught it sooner.  Starring June Allyson and Peter Lawford, this is a collegiate romance (and a period movie – it’s set in the 1920s, “when Coolidge is still president” according to the title card) and a charming musical to boot.  I did some digging to find out it’s actually a remake of a 1930 film and both are adaptations of a 1927 stage production.

Good News was actually Allyson’s second film with Peter Lawford, and they would go on to star as frankly iconic versions of Jo March and Theodore “Laurie” Laurence in 1949’s Little Women.  They certainly have chemistry – just as they play well together in Little Women, you root for them in this movie from their very first scene together.

It must be said that while the film goes out of its way to establish when it takes place, it throws authenticity to the wind with costuming.   As stated, it’s set in the 1920s, but the girls’ costumes and hair are exclusively late 1940s.  Sweater sets, wide circle skirts, soft ’40s curls, all there.  The men are somewhat better, though their hairstyles are definitely late ’40s.  None of this would be annoying if the movie hadn’t begun with a “IT IS 1920-SOMETHING” title card.

But that’s no reason to avoid the movie.  The romance is fun, the supporting cast funny, the songs well-placed and inoffensive.  Allyson and Lawford are not iconic singing stars, so there are no sweeping centerpiece songs.  Allyson could hold her own dancing (at one point she was cast opposite Fred Astaire, though pregnancy kept her from actually starring in the film), but this isn’t a dancing picture in that sense.  It’s light on the musical tropes and really stood out for me as an early example of Allyson’s charm, which led to her embodying some really great roles.  Lawford is fun to see in this sort of role; you do sense it’s small potatoes for him, but he has fun with it and never weighs it down.

Do I recommend Good News?  Absolutely, if you like musicals and you’re not interested in heavy drama.  It’s a delight to watch.